52.6% of those surveyed accepted that advertising will appear on a web page but they had very low tolerance for more than 2 advertising units per web page. 29.9% of survey respondents said that they will leave the site immediately if they perceived it cluttered. Women are more likely than men to abandon the site. (Have lots of ads on the site and can’t figure out why people are abandoning, this might be a reason, time to do some testing)

It is not only the publishers who are negatively affected by the ad clutter but also are the advertiser’s products and services. 52.4% respondents has a less favorable opinion of an advertiser when their advertising appears on a web page they perceive as cluttered.

A study by IDC shows that the users are less tolerant of Social Networking Services (SNS) advertising than other forms of online advertising. Ads on SNS have lower click-through rates than traditional online ads (on the Web at large, 79% of all users clicked on at least one ad in the past year, whereas only 57% of SNS users did), and they also lead to fewer purchases (Web: 23%; SNS 11%).

Market research firm eMarketer has cut Social Network ad spending estimate for 2009 to $1.3 billion down from $1.8 billion it projected earlier. It has also lowered 2008 estimated from $1.2 billion from $1.4 billion.

“As consumer usage of social networking sites continues to flourish, advertising has not kept pace,” a release from eMarketer explained. “In 2008 and 2009, the recession will affect all forms of online ad spending, but experimental formats, such as the ones available on social networks, which cannot always demonstrate a proven return on investment, will be hit particularly hard.”

So what should Social Networking sites do? Charge customers for the using the site? Nope, that is not going to work either. A recent AdAge study showed that no matter how much consumers hate advertising but they are not even going to pay for their favorite sites.

According to IDC Lower-than-average ad effectiveness on SNS will continue to contribute to slow ad sales unless publishers get users to do something beyond just communicating with others. If the major services succeed in doing so, they will become more like portals, such as Yahoo! or MSN, and they will come closer to the audience reach of the top services. If that happened, publishers would be better able to monetize their SNS. 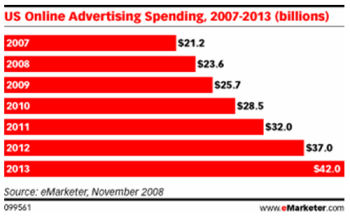