This post is the second part of my post on “3 KPIs for Measuring Twitter”. In the first part, I wrote that one of the KPIs for measuring Twitter is the Percent Visit Rate (%VR). %VR measures what percent of your followers click on your link to visit your site.

Tagging the URLs with campaign variables

Let’s say, I want to post a link to my last blog post on Twitter. Instead of simply posting a link http://webanalysis.blogspot.com/2010/02/three-kpis-for-measuring-twitter.html, I will append campaign variables so that I can track the performance in my web analytics tool.
Since I use Google Analytics on my blog, I will use Google Analytics campaign tracking. In order to track my URL as a campaign, I will add three query parameters, utm_source, utm_medium, and utm_campaign to the URL.

Using a unique value for utm_campaign will allow me to not only know how much traffic is driven by twitter but also which tweets are driving the traffic. I can also create a custom segments in Google Analytics and analyze all my data for these segments. 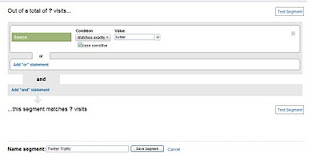 The following site has 100 twitter followers so their %VR ranges from 1% – 6%. If you tie this information with the actual message in tweet, time of tweet, day of the tweet etc. you can figure out what works for the followers. By creating the segments you can slice any report in Google Analytics to see how visitors are interacting with the site. 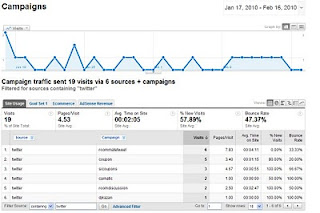 To make it easier for you to add these variables, I have a simple Google Analytics campaign URL builderon my site that should help you to easily tag your links with the campaign variables for Google Analytics before you post them on Twitter. I might add support for other major web analytics tools in future.

6 Replies to “Measuring Success of URLs Posted on Twitter”