Declaring things dead is nothing new. Every day someone declares something dead. For example, in 2007 many people were declaring page views and even web analytics dead. Well here we are three years later and neither of those is dead yet.

Now many Social media “experts” including Facebook’s COO have declared that email is dead and social media will takes it place. Ben and Jerry’s in UK dropped their email campaigns in favor of social media.
Is email really dead? Is it a question of either or will both exist going forward?

Few recent studies show that email is not dead (yet). According to an article by eMarketer, email still drives shopping over social. 37% of the shoppers prefer email as the promotion delivery method while only 9% prefer social. Considering that social media (online social media in its current state) is still in infancy these numbers are great but this also shows that email is not dead yet.

According to ExactTarget’s “Subscribers, Fans and Followers” report, most internet users engaged with brands only via marketing emails. They also found that there is significant overlap between the three channels and vast majority of social media fans or followers were also email subscribers. Nearly a third subscribed to emails in addition to being fans of brands on Facebook. (Source: How Are Email, Facebook and Twitter Audiences Different?

Considering that both email and social media are important, many marketers are using the power of email to spread the word about their social media presence. Two-thirds of the marketers surveyed by eROI say that they are integrating social media into email. 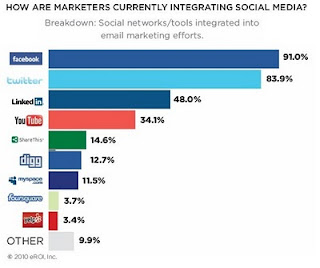 For now, email and social are co-existing. I suggest that you start integrating your social media into email campaigns if you are not already doing it. Every customer segment behaves differently and you need to look at your own data rather than reply on some social media expert’s advice to draw any further conclusions.