HiPPO is an overly used in the web analytics community to make the web analysts feel good. But this term, in my opinion, does more harm than good to you. 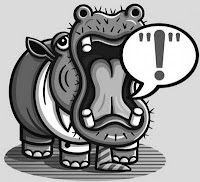 Though I meant to write this post a long time ago, today a post by Steve Jackson – HiPPO could be your best friend finally prompted me to write it.

For those how don’t know, HiPPO is a term used to describe the opinion of the Highest Paid Person (HiPP) i.e. Highest Paid Person’s Opinion. This terms basically says that the person who gets paid the most (it assumes that this person is also the highest authority position) will make decisions that are not based on any facts but rather based on his/her gut feel. As a result his/her opinions are generally wrong. Really? Do you really think that they got into their position by giving wrong opinions?

Some experts even encourage analysts to publicly embarrass HIPPOs by proving them wrong? Really? How do you think it is going to help you? Will you have a job tomorrow?

As an analyst, your job is to help your organization make better and smarter decision by using the information you gain from the data. How is calling Highest Paid Person a HiPPO or embarrassing your boss in public going to help it?

To make your point and get someone to listen to you, you have to make friends and not enemies. Just thinking that all the opinions expressed by the HiPP are wrong and not based on fact will automatically put you in either a defensive or an offensive mode instead of a collaborative mode. You need collaboration to succeed. Web analytics is still not integrated into business optimization process and the wrong attitude towards HiPPO will hinder it further.

Think about this, if you are an analyst attacking a HiPP in the room, who do you think will win at end?

4 Replies to “HiPPO: Wrong Advice That Will Get You In Trouble”